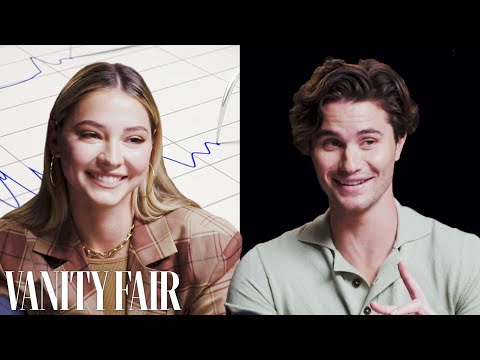 Video
Share on Facebook
Share on Twitter
Share on Pinterest
Share on LinkedIn
Madelyn Cline and Chase Stokes, stars of Netflix’s ‘Outer Banks,’ take Vanity Fair’s infamous lie detector test. Would Chase consider himself a “Florida Man?” Is it true Taika Waititi influenced him to become an actor? Would Madelyn swipe right if she saw Chase on a dating app? Was she in a Chuck E. Cheese commercial as a child?

Want to stay in the know? Subscribe to Vanity Fair Magazine and be exquisitely informed ►► http://vntyfr.com/2RuQGW2

Cameron Diaz and Benji Madden Were Seen Kissing at Adele’s Concert
Amazon Secretly Has a Ton of Dermatologist-Approved Sunscreen on Sale Right Now
‘That Kiss?!’ and Other Thoughts We Had During Only Murders in the Building Season 2 Episode 2
Prince Charles Reportedly Had ‘Emotional’ First Meeting With Granddaughter Lilibet
Disney’s “Baymax!” Series Includes an Important Moment For Trans Representation