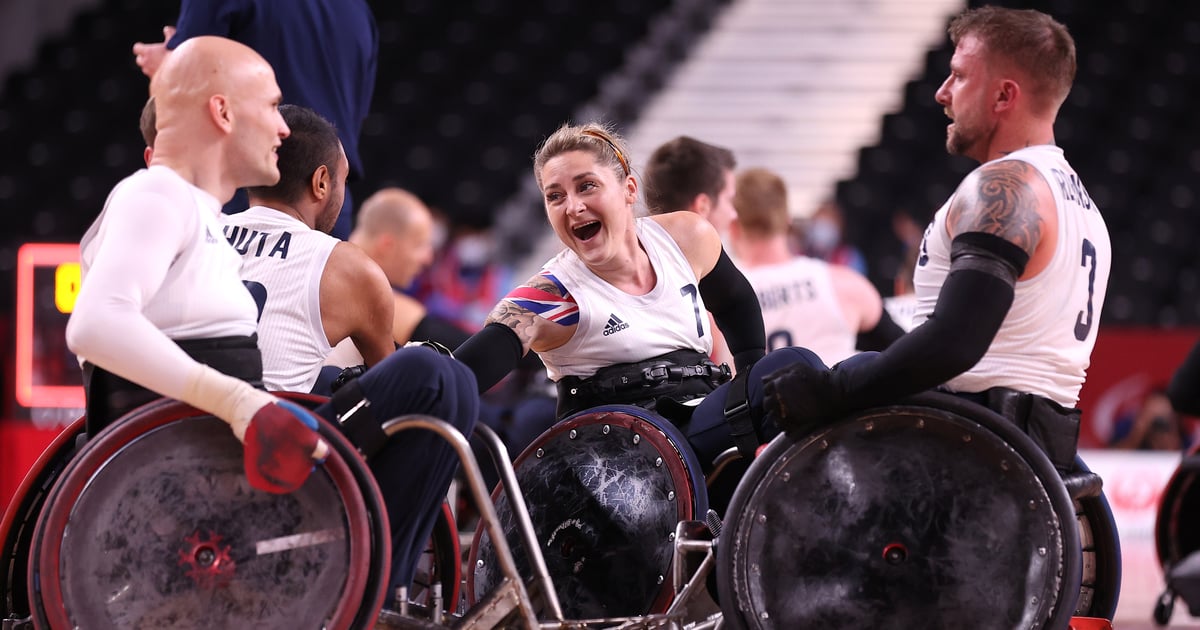 On Aug. 29, when Great Britain’s wheelchair rugby team claimed a 54-49 victory over Team USA (featuring opening ceremony flag bearer Chuck Aoki) to score a Paralympic gold medal, Kylie Grimes made history as the first woman athlete to win gold in the sport. While Grimes claimed the golden record, at the Beijing 2008 Paralympics, Canada’s Erika Schmutz was the first woman athlete to ever medal in wheelchair rugby.

Wheelchair rugby is a mixed-gender team sport, but only four out of eight teams in Tokyo included a woman competitor, which NBC Sports’s On Her Turf reports is the most women to play wheelchair rugby at a Paralympic Games to date.

Grimes was in a diving accident at age 18, and she started playing for the London Wheelchair Rugby Club in 2010, then Team Great Britain a year later. This is Grimes’s third Paralympics after competing in wheelchair rugby in 2012 (Great Britain came in fifth) and switching to F51 club throw in 2016 (she finished fourth).

Last year, Grimes, now 33, told Paralympic.org that the fact that men dominate the sport motivated her to rise in the ranks and play on the international level. “I’m treated no differently, I’m a team member and that’s exactly how it should be,” she said. Following her win, she told PA Media, “Wheelchair rugby is for everybody, for all of us: young girls, young boys, youth, everybody. I’d love more women in my sport. Women can match the men.” She added, “If I can get more women involved as well then the more merrier, I would be delighted.”

Ahead, check out footage and snapshots of gold-medal Grimes celebrating her and her team’s victory.

19 Pickleball Gifts to Help Your Favorite Player Eat, Dink, and Be Merry
Meghan Markle’s Favorite DeMellier Handbag Is on Sale for Black Friday
Fashion Show – Gucci: Spring 2012 Ready-to-Wear
How You Can Help Victims of the Colorado LGBTQ+ Club Shooting
Here’s What to Expect in the World of Wellness in 2023