Ever sputtered expletives at an inside-out umbrella? Cursed its crappiness as it lay torn asunder, metal spines poking out like a dislocated elbow, after what was little more a light breeze? Sure you have, we’ve all been there.

The reason you were led to ask an inanimate object, in your temporarily psychologically unsound state, why it can’t seem to get its shit together is simple: that umbrella cost the same as your lunch, and we hate to break it to you, son, but you get what you pay for.

While it might not sound like the sexiest of topics, unless you want to spend half the year trudging through sheets of rain, new shoes ruined forever and dignity drowning in a puddle of self-pity (you get the idea), read on for a complete guide to finding the best umbrella for staying dry and stylish. Buying An Umbrella: What To Look For

When shopping for a defence against the elements, first consider what type of umbrella you’re in the market for. “The main purchasing decisions are whether you want a walking length or folding umbrella, an automatic or manual opening mechanism, and the size of the open canopy,” says Nigel Fulton, chief executive of Royal Warrant-holding umbrella firm Fulton. “The rest then comes down to personal preferences such as fabric, handle shape, material and finishes.”

Whatever you do, steer clear of the kind of paper-thin protectors sold outside tourist attractions. “They tend to be made with a lower quality frame and fabric materials, and have very little wind-resistance and durability,” adds Fulton.

The fix for making sure you don’t get lumped with a crappy canopy? A five-part buying checklist.

If you’re after an umbrella that won’t implode within 10 seconds of exposure to the outside, there are a few things to bear in mind – including, according to Fulton, the number of ‘sections’ in the umbrella’s frame.

This refers to how many times the shaft and ribs fold down when the umbrella is closed. Essentially, the greater number of folds (six being the standard), the stronger the umbrella will be.

Flexibility is critical for wind-resistance, so prioritise umbrellas with fibreglass and carbon-fibre ribs (the bits that go from the centre to the edge of the canopy) for a stronger frame that’s less likely to blow inside out

“This will allow the umbrella to flex with the wind and will put an end to the days of misshapen umbrella canopies,” says Christine Naysmith from umbrella retailer Brolliesgalore.

Practical as they may be, the humble umbrella can also serve a purpose as a stylish accessory too, provided you pick the right design.

Some patterns and colours work better as a pocket square than a swathe of material, so if not opting for a simple block colour or classic check style, at least take time to consider how that pink tartan will look hovering above your head.

Nylon or equally waterproof polyester are the most two common fabrics used for umbrella canopies – handy, given it’s the actual material that stops you from getting wet.

If you happen to live in a particularly damp clime — say, Mawsynram (officially the wettest place on earth) or, you know, Scotland — it’s also possible to find umbrellas finished with additional coatings and treatments to stop them remaining sodden after a shower.

There are several different types of shaft. (No laughing.) ‘Tube shafts’, usually made from steel, are hollow, which makes them more lightweight but less sturdy.

There’s also the ‘solid stick’ style, made from a single piece of wood for greater strength but less flexibility, and then the ‘fit-up’, somewhere between the two.

When you need to arrive at a business meeting dry but don’t want to carry a full-sized umbrella to the pub after work, look for a collapsible umbrella that can be easily stowed in a backpack. A prime example, this offering from high street retailer Next will ensure that nothing dampens your style credentials. What do Londoners call two straight days of rain? A weekend. Fortunately, the city’s inhabitants (and anyone else with an internet connection) has access to London Undercover. The rainwear specialist excels at producing handsome, playful designs including classic canopies fitted with camouflage linings. 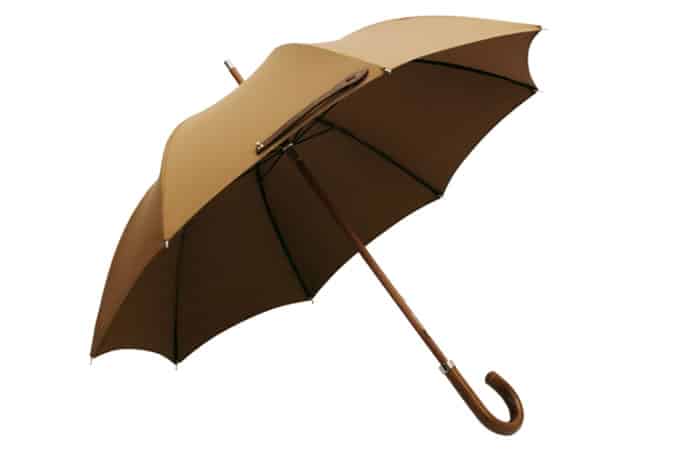 There’s only room for one type of reign around Buckingham Palace, which is why since 2014 the British Royal Family has chosen Fulton to shield from unexpected showers. The UK’s biggest supplier of umbrellas, its large walking models can comfortably accommodate two people and come loaded with automatic opening mechanisms in a range of contemporary prints. Having grown up in England’s Midlands region, British design legend Paul Smith is well experienced in dealing with bad weather. His umbrellas are a perfect balance of form and function, built from quality materials like solid wood handles and finished with his signature stripe canopy. Blunt umbrellas are as architecturally sound as they come. Each model is put through a 38-point quality control check at the hands of engineers before hitting the market. That means when monsoon season inevitably rolls around, you can be sure your suit won’t be sodden by the time you make it to the office. Whether it’s with expertly cut outerwear or stylish umbrellas, British high street stalwart Marks & Spencer is a dab hand at sparing men’s duds from a drizzle. Coincidentally, both usually feature the retailer’s Stormwear and Windtech technologies for an extra buffer against bad weather. When it’s bad outside, but you wanna look good. Who you gonna call? (It’s clear where this is going.) If gale forces are on the cards, reach for American brand GustBuster, whose umbrellas are tested by the College of Aeronautics to ensure they can withstand winds of up to 55 mph. It says a lot about an umbrella when the mere sight of it is enough to make you dream of downpours. Totes’ stylish rainshades do just that, rendered in the patterns more commonly seen on suits, but at the fraction the price of Savile Row gear (so you won’t mind as much when you leave it in a taxi.) Founded in Scotland in 1856, Hunter Wellington boots have provided the ultimate protection during downpours for more than 150 years. For days spent commuting in the rain rather than camping at a festival, the British brand’s umbrellas are a worthy substitution; constructed with flexible fibreglass frames in an array of colours. Often described as a waterproofing wonderland, James Smith founded his umbrella firm in 1830 and the shop has been selling ready-made and bespoke models in London ever since. Despite originally being made out of copper and whale bones, today’s umbrellas feature more modern materials, but all retain a classic design.