Getting dressed for the beach isn’t as easy as it should be. There are a lot of elements to consider – sand that will tear up your loafers, a gusty sea breeze to contend with, the general sogginess of sitting next to lapping ocean waves – as well as the general summer heat. On holiday, you may have to pack different beach outfits depending on what activities you’ve got planned.

To help you on your way we’ve rounded up everything you’ll possibly need for your trip to the beach, sartorially speaking, for every beach activity you can think of, so you can sit back on your stripy deckchair and soak up the rays – weather permitting.

For A Day At The Beach

Do you really need to plan an outfit for a day on the beach? Well, it doesn’t require a huge amount of effort, but it pays to put at least a small amount of work in. Flip flops and those board shorts you’ve had since you were 16 are not cool.

Do your bit for the ocean by a) looking your best and b) buying swim shorts made of recycled sea plastic, like these from Naeco. Their simple, tailored cut will look as good in the drink as they will while you sip on one at the bar.

Elsewhere, be smart and buy things that are waterproof. Forget smart, leather sandals as they’ll be useless in the sand and opt for a pair of rubber Birkenstocks, which look the same as their leather cousins, but are easy to wash, lightweight and can be worn in water. Likewise, go for a waterproof tote bag to pack your essentials, and you won’t have to worry your phone will get soaked as those annoying kids splash around you. For The Beach Bar

Beach season is upon us, folks, which means — if you’re lucky — at some point you’ll find yourself perched at some shack in the sand that serves cocktails strong enough to put hairs on a nun’s chest.

Whatever tiki-style bar that happens to be, chances are you’d rather knock back another than go home for a change of clothes before the evening, which calls for a versatile outfit.

To avoid killing the day drinking buzz, head out in a pair of smart but breezy linen trousers and a Cuban collar shirt (both of which give off acceptable “life’s a beach” vibes at dinner), and say “shell yeah” to this season’s return of the espadrille. Take a lightweight jacket or overshirt for after sun and, one more? Why not. A Walk On Beach

A sunset stroll at the beach is a good opportunity to get some use out of the smarter items you packed in your suitcase, if only because the light is great at that time of night. Your starting point is a pair of cropped trousers – ideal if you want to dip a toe in the lapping waters while still smart enough to go straight to a beachside restaurant.

A sandy tonal outfit looks considered even when you’re just putting staple pieces together. So pick out your go-to off-white T-shirt and, if the temperature calls for it, a linen overshirt to fend off the sea breeze. For A Beach Party

If you’re lucky enough to be invited to a beach party in the first place, you’re clearly doing something right. But, just because you’re going to a party on a beach, don’t assume you can rock up in whatever you might wear for a day spent prone and almost comatose in the sun.

While the typical beach party might conjure up images of neon body paint, sparklers and shudder-inducing shutter shades, we’re presuming you haven’t been cordially invited by Flo Rida himself, so avoid anything that says hedonistic spring breaker.

Instead go smart but without doing the full Jay Gatsby. A grandad collar shirt will put you at just the right point between smart and casual and crucially won’t make your neck swell to levels you previously considered impossible. Pure cotton is best here and a darker colour will be less of a testament to drinks that missed their intended destination.

Mid-colour chinos will pair nicely with the aforementioned and will again hit the fence sitting level of formality that you’re aiming for. Finish your look with some leather sandals (strictly no flip flops) and ‘70s style shades to inject some old school nonchalance into your look. Did someone say “mojito“? For Dinner On The Beach

Some guys would reach for the white dress shirt when dinner calls, a tell tale sign that the wearer has no idea what they’re doing when it comes to dressing the smarter end of smart-casual (plus you’ll get mistaken for the waiter). Firstly take a blazer of some kind – the more neutral the cut and colour, the more wear you’ll get out of it.

Here we go for a simple blue version in a harder wearing cotton so that a rogue sea breeze doesn’t blow you off your main course. Slip a tonally matching and simple polo shirt under it for relaxed summer tailoring 101 and then contrast the upper half completely with some white chinos. On-trend boat shoes finish off the outfit for a look that’s inspired by the sea but isn’t shouting it at you like a power-tripping lifeguard with a megaphone. Fashion is a minor concern when you’re belly-flopping off the side of a paddle board. If people are laughing, it’s not because your shorts and shades don’t match. The point being, if you have an action-packed day at the beach planned, do yourself a favour and think function first.

You can still make like Connery at the coast. The right pair of tailored swim shorts will be form-flattering but also easy to swim in. Look for a pair with a zipped rear pocket, like these from Orlebar Brown, so that your house keys don’t end up at the bottom of Davy Jones’s Locker.

Pair them with a quick-drying, stretch-fabric T-shirt that also comes with UPF sun protection – safety first, even you are going parasailing. Speaking of which, don’t forget some polarised sunglasses to tackle the glare from the sea. Swerve the bolder colours and big logos you sometimes get with surfwear brands and stick with neutral colours to stand out in a good way. 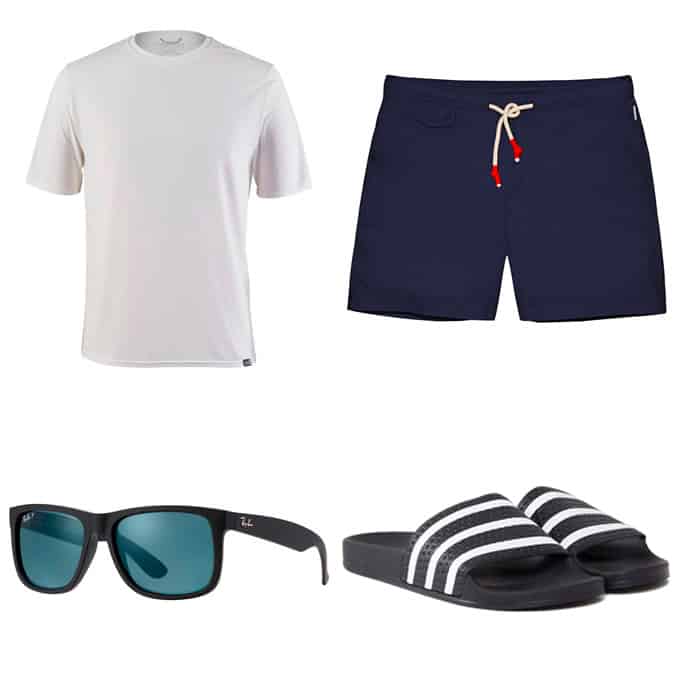