Like leather jackets and quiff hairstyles, much of the reason we think sunglasses are cool is that they look good in the movies. Actors and directors know that people are more enigmatic when you can’t see their eyes. Behind the right pair of sunglasses you can hide mystery, mischief, defiance and lust, not to mention a stinking hangover.

In turn, audiences have always been drawn to a leading man in shades. Style icons like Steve McQueen are still known for the sunglasses they wore, and sales of Ray-Ban Aviators famously went up by 40 per cent after Tom Cruise wore a pair in Top Gun.

Below we’ve rounded up the best sunglasses from the movies. It’s worth saying up front that Ray-Ban is well-represented in our list. There are a couple of reasons for this.

First, the brand makes some of the best sunglasses you can get. No arguments there. But it’s also savvier than most when it comes to product placement in movies. Since the 1980s, starting with Risky Business and Top Gun, Ray-Ban has struck deals with Hollywood studios to see its shades appear in blockbusters and indie favourites alike.

Classics from Persol and lesser-known brands also have their time in the sun, of course, and below you’re bound to find a style that suits your face shape and style. Ready for your close-up? 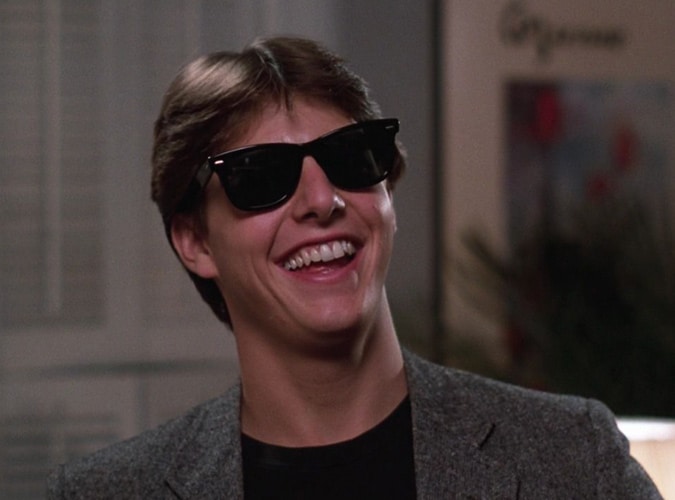 These days, Wayfarers are some of the most ubiquitous and easy-wearing sunglasses you can buy, but they weren’t always this popular. After a quiet spell in the ’70s, the style was plastered across the poster for Risky Business, one of the first coming-of-age movies of the ’80s.

Paired with Tom Cruise’s megawatt smile, they became synonymous with youthful energy and yuppy style. Cruise wore his with a crew-neck tee under a blazer, a look that – incredibly – still works more than 35 years later. Although they’ll look just as good with your swim shorts.

Best suited to: well, everyone. Also worn on-screen by the Blues Brothers and Leonardo DiCaprio in The Wolf of Wall Street, the trapezoidal frames suit most face shapes, and there are many different colours and metals available, although plain black will always be hard to beat. This is the kind of product placement money couldn’t buy in the 1960s. Steve McQueen was a Persol collector and wore the blue-lens 714s with a three-piece suit on The Thomas Crown Affair in ’68. In the 50 years since, people haven’t stopped talking about how stylish the film, the man and the shades were.

They feature the teardrop shape of an aviator, but the tortoiseshell frame makes them work with tailored pieces in a way mirrored shades never would. Persol re-released the style in 2010, complete with its big talking-point: the folding bridge mechanism for safe and easy storage.

Best suited to: anyone whose style nods back to mid-century classics, from razor-sharp tailoring to open-collar shirts. These are the sunglasses of a genuine cinematic icon. Playing a man on the run in Hitchcock’s mistaken-identity masterpiece, Grant’s mix of sophistication and easy-going modernity oozes through in the clothes he wears.

We’d like to tell you definitively what brand the thick-rimmed sunglasses are, but there’s a big unresolved debate about whether they are Tart Arnels or Moscots. It doesn’t really matter, because Oliver Peoples created a tribute to them in collaboration with Grant’s estate. For dashing midcentury style, you won’t do better.

Best suited to: midcentury fans with good tans. As well as your best grey suit, try these frames with knitted polos or a sky-blue linen shirt. They’ll work with most face shapes. Aviator sunglasses were first made – surprise – for test pilots. Way back in the 1930s, before the advent of modern helmets and visors, they needed something to protect their eyes from the glare of the sun at altitude. So they were a natural inclusion in the 1986 homoerotic drama action film Top Gun, even if they were only worn on the ground by Tom Cruise, Val Kilmer and co.

The big teardrop shape offers lots of protection and no shortage of attitude, although they’re such a classic now that nobody could call you a maverick for wearing a pair. Still, if you feel the need, the need for optometrist approval of your choice of sunglasses, these are as practical as they come.

Best suited to: Modern fly-boys with a strong jaw and enough sense to leave the bomber jacket on the hook. Wear them with simple tees instead and eject if you have softer features or a narrow face. In 1995’s Leon, Jean Reno’s hitman-with-a-heart sported an outfit that, incredibly, predicted what thousands of east London men would be wearing 20 years later. The overcoat and beanie combo is a staple look for anyone who’s into workwear, but it’s the round acetate sunglasses that really make the look.

The originals are a discontinued pair of Jean-Paul Gaultier, defined by a much thicker rim than you find on most round glasses, such as John Lennon’s famous pair. You can occasionally find them on eBay, but other brands have styles that look very similar. The best we found is the Agar frames from Cubitts. Accessorise with a potted house plant if you have to.

Best suited to: people with square- or heart-shaped faces and a thing for distinctive accessories. Wear them with simple, block-colour basics for maximum impact. Matrix-style sunglasses, like every other damn thing from the ’90s, have been trending for the past couple of years. Smaller frames with angular lenses or a slanted oval shape, like those worn by Keanu Reeves, might be the hardest style to wear on this list but they can complete a statement streetwear outfit.

Keanu’s originals are thought to be custom-made, so you’ll have to look at replicas or sports sunglasses to get the look. Wear them with big logos, bright colours and loose-fitting sportswear. And go easy on the cyberpunk aesthetic: if it’s nice enough for sunnies, you don’t need leather trousers.

Best suited to: Oval or heart-shaped faces. Stay away if your face is long or thin – the bug-eye lenses will make you look like a praying mantis. Considering his other style essentials include a mauve dressing gown and printed harem pants, the Dude from The Big Lebowski had excellent taste in sunglasses. The stoner icon from the Coen Brothers’ classic wears the 03 model from French brand Vuarnet.

First designed in the ’60s, these big, square-ish frames hide a multitude of sins the morning after a big night but they also lend a retro air to smarter outfits than the Dude would ever be caught in. Try them with a suit worn with a Cuban collar shirt. Ferris Bueller also wore these sunglasses, and wore them well, but nothing compares to that early scene in Reservoir Dogs as the gang of identically-suited criminals walks down the street in slow-mo. There are actually a few styles on parade in that shot, but our pick is the Clubmasters worn by Tim Roth’s Mr Orange.

Defined by the ’50s-style browline frame, it’s thicker at the top than it is at the bottom, emphasising the wearer’s natural brow. It’s one of the most versatile shapes you can get. Quentin Tarantino proved you can wear them with a funereal black suit, but they also look the business with a casual polo shirt.

Best suited to: anyone whose wardrobe is forever trying to nail the smart-casual balance. 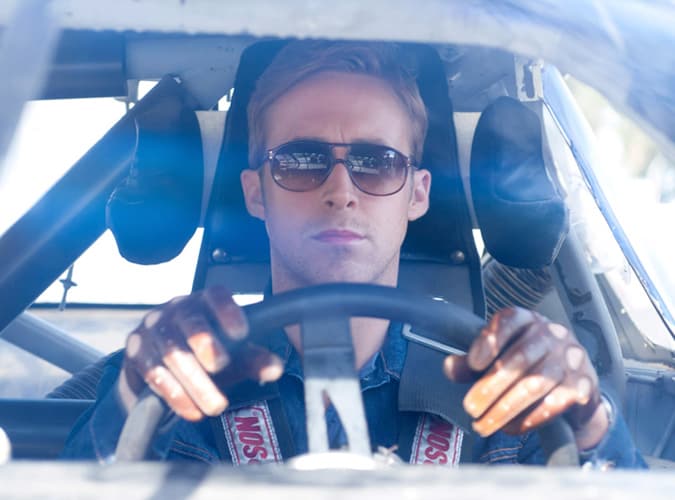 It’s usually the scorpion souvenir jacket that everyone remembers from this film, but Ryan Gosling’s impeccably styled driver also had a killer pair of sunglasses.

They’re made by Selima Optique, a New York-based luxury eyewear brand that’s big on impactful retro designs. Hence the ’70s-influenced aviator shape, the brown colour and gradient lenses. When styling, there’s no need to stray far from the original: a simple white T-shirt, jeans and a real hero of a jacket.

Best suited to: people with an A-list jawline. The rounded shape won’t flatter those with equally round faces. Fear And Loathing In Las Vegas The sunglasses Johnny Depp wears in this film weren’t picked at random by a costume designer – they were a style worn by Hunter S Thompson himself, the author of the book it’s based on and the character Depp plays. Ray-Ban’s Shooter frames are a variation on the Aviators – a big look for a big personality, especially with yellow lenses.

Thin temples give increased peripheral vision, and it’s claimed the distinctive ring between the lenses is a cigarette holder that allows hunters to keep both hands on their weapons. That’s never been confirmed by Ray-Ban, but we want to believe it nonetheless.

Best suited to: strong features and an even stronger sense of personal style. Try them with military classics like a khaki field jacket before you go all out with a Hawaiian shirt. Okay, so nobody wore sunglasses in the 19th century, but this is a Quentin Tarantino film so we can forgive the stylistic flourish, especially for cool sunglasses as memorable as these. Another custom-made style, costume designer Sharen Davis based them on a pair Charles Bronson wore in The White Buffalo, but they also share DNA with glasses issued to RAF pilots in the 1960s.

You’ll have to settle for knock-offs, but you can rest assured that you’ll have a style that few others are wearing this summer. A little bit military, a little bit steampunk, the distinctive details are the black-on-gold colourway with a double bridge (or top bar) and temples that loop under your ears for a snug fit. Abortion Funds to Support in Each of the States Most Likely to Restrict Abortion
Planned Parenthood’s Powerful New Video Aims to Inspire Us to Keep Fighting
Coco Gauff Opens Up About Feeling Pressure to Win at 15: “I Just Put So Much on Myself”
Orlando Bloom’s Workout Routine Is Impressive For More Than One Reason
In Powerful Dissent, Liberal SCOTUS Justices Call Roe v. Wade Overturn “Cavalier”