While The Good Nurse tells the chilling saga of serial killer Charles Cullen, its title actually refers to the other nurse in the story, Amy Loughren. She worked side-by-side with Cullen at Somerset Medical Centre in Somerville, New Jersey and went undercover to lead to his arrest in real life. The pair were actually close friends, working many late nights together at the facility’s intensive care unit. In the film, Loughren is played by Jessica Chastain and Cullen by Eddie Redmayne.

Who is the real woman behind the true crime dramatization? Here’s Amy Loughren’s real story.

Who is Amy Loughren?

While working at Somerset, Loughren was a single mother of two. She suffered from cardiomyopathy, which eventually led to her having to get a pacemaker. However, she didn’t disclose her illness at work in fear of losing her well-paying job, according to Slate. Loughren was so close with Cullen that he even helped her through debilitating episodes during her work shift that left her breathless and incapacitated. She told People of their former friendship, “He was funny. We bonded right away and became friends.”

How did Amy Loughren figure out Charles Cullen was murdering patients?

Loughren was approached by investigators who had suspicions over the number of deaths at Somerset in connection to Cullen. The issue came to a head following the death of a reverend named Florian Gall, who was being treated at the facility and had shown signs of improvement. When Gall surprisingly died from a massive heart attack, his autopsy revealed a lethal does of the drug digoxin in his body. In small doses, digoxin can help with heart problems, but Cullen administered fatal doses to patients, which led to their deaths.

When Loughren saw documents listing the drugs Cullen was ordering, she knew something was wrong. “There were so many withdrawals of lethal medications that you wouldn’t order unless you wanted to kill someone,” she told CBS at the time.

How did Loughren get Cullen to confess?

Detectives asked Loughren to wear a wire and to try and coax information out of her one-time friend. But in an interview with Glamour UK, she said that it presented a problem when they found out about her pacemaker.

“I was scared shitless,” she said. “It was terrifying going in, especially when they wired me up, saw my scar of a recent pacemaker implantation and the detective said ‘no, we can’t put this wire on you.’ I said, ‘Yes you can. I’m a cardiac nurse, I know I’ll be ok.’ He went to his colleague and they talked about shutting this down, so I had to talk them into it. The truth is I didn’t know how this would affect my heart, but I knew I needed to go in there and get that confession. I was determined maybe, not brave.”

The pair met at a restaurant and Loughren, with a wire, got enough info for Cullen to be arrested on probable cause. He eventually confessed to 40 murders, though it is suspected he may have killed far more people under his care. He is currently serving 17 consecutive life sentences.

Did Loughren and Cullen stay in touch after his arrest?

Before Cullen realized that Loughren had turned on him, they still exchanged letters. She even visited him in jail.

“When he found out that I had been working for the New Jersey Crown Prosecution that was the last time he answered my letters,” she said. “Up until then, I saw him in prison maybe dozens of times. I really wanted to know if I had harmed someone accidentally and I wanted answers and closure. I think I wanted to be in denial that he was a mercy killer, I wanted to make certain that whoever my friend Charlie was that he was no longer there.”

Cullen had claimed that he was putting his “very sick” victims out of their misery, but many of them did not have terminal conditions. The method and medications he used “were terrifying and paralytic so he could take them off their sedation, wake them up, give them a paralytic and watch them struggle to breathe,” Loughren told Glamour UK. Loughren says she never got the answers she wanted from Cullen, but she did come to understand “how charismatic he was and how easy it was to be drawn in.”

She added, “It was a process of being able to forgive myself for not seeing it.”

Where is Amy Loughren now?

She currently lives in Florida with her family, and has been active in promoting The Good Nurse alongside stars Jessica Chastain and Eddie Redmayne. 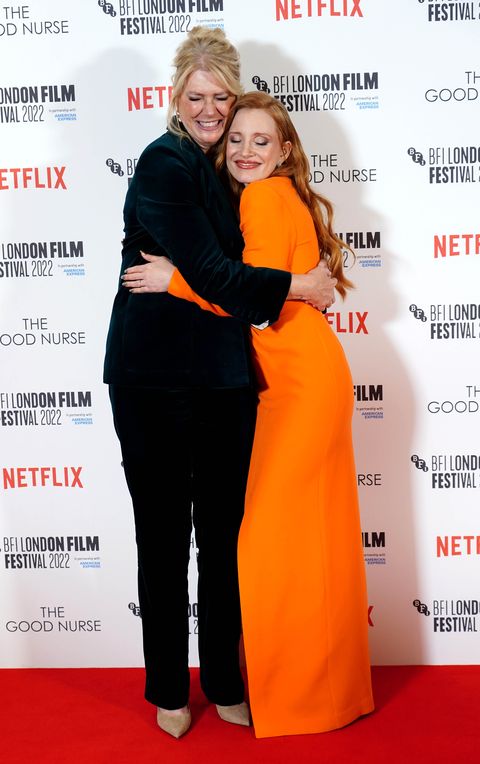 Loughren with Jessica Chastain at the Good Nurse premiere in London.

Aimée Lutkin is the weekend editor at ELLE.com. Her writing has appeared in Jezebel, Glamour, Marie Claire and more. Her first book, The Lonely Hunter, will be released by Dial Press in February 2022.

Rodarte Fall 2015 Ready-to-Wear – Fashion Show – Style.com
Taylor Swift’s Boyfriend Joe Alwyn Gave a Subtle, Sneaky Look Into Their Life Together
The Last Episode of Wednesday Sets Up Potential Mysteries for Another Season
This Milky Toning Lotion Keeps My Dry Skin Hydrated and Moisturized
Everything to Know About Kegel Balls, Including When You *Shouldn’t* Use Them