On Tuesday, November 22, Kate Middleton embodied her role as the new Princess of Wales for her father-in-law’s state banquet at Buckingham palace. King Charles was hosting an event to honor South African President Cyril Ramaphosa’s visit to the U.K. For the event, Kate wore a white caped gown by Jenny Packham covered in silver appliqué along the raised shoulders.

The gown swept to the ground, and was broken up by the Princess’s blue sash, which represents her role as a member of the Royal Victorian Order. She also had a yellow ribbon pinned to her chest as a brooch, signifying her position in the Royal Family Order.

It was Kate’s accessories that really stole the show. The mother-of-three was wearing the famous Lover’s Knot tiara, a piece that was worn often by the late Princess Diana, Kate’s mother-in-law. The diadem was adorned with 38 teardrop-shaped pearls, all hung from arches encrusted with diamonds. The Princess has been seen wearing it before, in 2015, 2016, and 2019 at the family’s Diplomatic Reception. 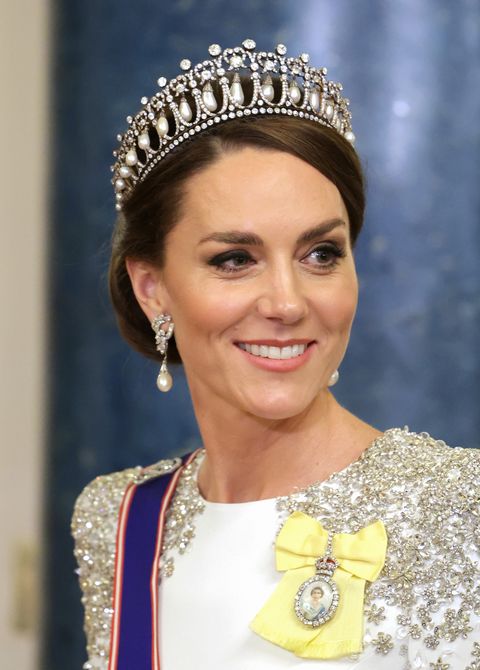 On her wrist, she had on a three-strand pearl and diamond bracelet that came from the late Queen Elizabeth III’s jewelry collection. In her ears were matching pearl drop earrings that also once belonged to Diana, the People’s Princess.

Kate often wears jewelry associated with Diana. Before the banquet, she stepped out with her husband Prince William to greet President Ramaphosa upon his arrival wearing the same pearl earrings and a significant brooch. The piece is called the Princess of Wales Feather Brooch, and it was made as a wedding gift for Princess Alexandra of Denmark in 1863, according to People. 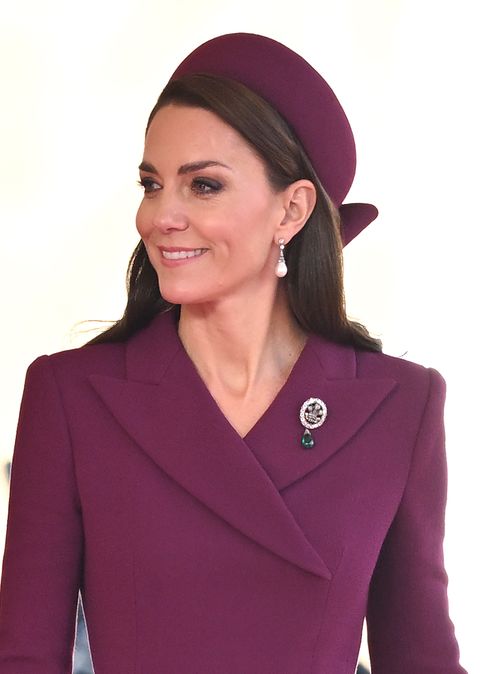 It was, of course, worn by Diana when she held the same title, and it was the first time Kate has been seen wearing it since she stepped into her new role.

Aimée Lutkin is the weekend editor at ELLE.com. Her writing has appeared in Jezebel, Glamour, Marie Claire and more. Her first book, The Lonely Hunter, will be released by Dial Press in February 2022.

This 10-Minute Low-Impact HIIT Workout Proves You Don’t Need to Jump to Sweat Buckets
The Biggest Snubs and Surprises From the 2023 Oscar Nominations
The Low-Oxalate Diet Isn’t For Everyone, Experts Say. Here’s What to Know.
Doja Cat Covered Herself in Red Body Paint and 30,000 Crystals for Schiaparelli’s Paris Fashion Week Show
Blake Lively Will Star in It Ends With Us, Adapted From Colleen Hoover’s Bestselling Book